Augusta Therese Eck was the first wife of my wife’s paternal grandfather, Fred Loose.  The names of her parents were first found on the record of Augusta’s marriage to Fred on 18 April 1887 in Rantoul, Calumet County, Wisconsin.  On that record her parents are listed as Frederich Ernest Eck and Louise Emilie Eck.  Other records give various spellings and even other given names for her father, which has made tracking him down a bit difficult.

Both parents are also mentioned on the marriage records of three of Augusta’s brothers.  All of these marriages occurred in central Wisconsin.  However, I could not find any other record of Frederich Ernest Eck anywhere in Wisconsin.  I was able to find records of Louise Emilie Eck however, mostly in city directories for Marinette, Marinette County, Wisconsin.

Eventually, I was able to confirm that the family was originally from Wichtshausen, Schleusingen, Saxony, Prussia.  This lead me to two different sets of church records for this village, and eventually to several records for both Frederich Eck and Louise Emilie Endter Eck.  They were married in the church at Wichtshausen on 2 May 1858 and they had 6 children before Fred Eck died on 12 May 1872.  The unexpected “find” that came along with finding Fred Eck’s death record was the death of his oldest daughter, Anna Maria Magdalena Justine Eck recorded on the same page, immediately above the entry for Fred.  They died two months apart of different causes. 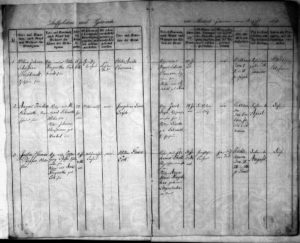 Second marriage of Louis Emilie Endter Eck is third record on page. Click on this image to see a transcription and translation.

So what happened to Louise Endter Eck after her husband died?  A little more digging in the same church records showed that she married again.  Her second husband was Justin Hermann Pfeffer.  This marriage took place in the same church on 3 August 1873.  This was his first marriage.  Louise is listed as Wittwe [=widow] Louise Eck.  Both of her parents were deceased by the time of her second marriage.  Her father had been a “master nail smith.”

Now that I knew about her second marriage, it was easier to find out more information about Louise Endter Eck.  I just had to use her new married name of Pfeffer.  The first new information found was the immigration record for Louise Pfeffer showing their arrival in New York City on 19 July 1881.  Louise Pfeffer is listed without Justin, but with 4 children.  All of the children on the record are listed with the last name of Pfeffer, but two of them were actually children from Louise’s first marriage — Auguste and Bernhard Eck.  The other two children, Richard and Wilhelmine Pfeffer, are from the second marriage.  (I still need to find their birth records.)  It turns out that Justin Pfeffer immigrated about 9 months earlier with one of the children from Louise’s first marriage, listed as Christopher Pfeffer – step son.

But there are still some mysteries about Louise Emilie Endter Eck Pfeffer.  After arriving in the United States, Justin and Louise married again on 18 May 1882 in Sheboygan County, Wisconsin.  Why?  But by 1899, the Marinette City Directory lists Mrs. Louise Eck as living with one of her sons in Marinette.  In 1900, she apparently traveled back to Europe, returning on the ship Prince Regent Luilpold at New York City on 11 November 1900 as Louise Eck.  After that she is listed with the last name of Eck on census records and in city directories as living in Marinette until her death in May 1918.

Now for the final new mystery about this couple.  According to Justin’s death and marriage records, his mother’s maiden name was Eck.  Was Justin’s mother related to his wife’s first husband?  Still another mystery to research.

This site uses Akismet to reduce spam. Learn how your comment data is processed.