Until recently there have been two mysteries concerning my great grandfather (my mother’s maternal grandfather). The first mystery concerned the exact birth place of “Fred” Bull. I knew he was born in Germany, but the family lore did not provide an exact location. The little bit of information that I had was confused by various spellings of the name of his home town. 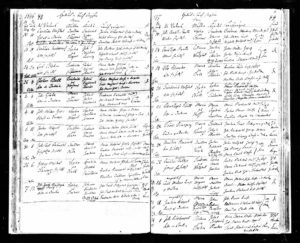 Eventually I did narrow the options down to one town that I thought was correct, but I could not find any accessible records for that town at first. Then I discovered a restricted microfilm at Family Search. With the help of some friends, I gained access to this microfilm on-line. The first find was the birth record you see here for my great-grandfather “Fred” Bull. His full name is actually Johann Friederich Theodore Bull. He was born in Brudersdorf, Mecklenburg-Vorpommern, Germany. The birth date on this record matches the birth date shown on his tombstone. Other information that I found on the same microfilm convinced me that this was the correct birth record for my great-grandfather.  You can read a transcript and translation of this birth record here.

Of course there were other “finds” on this microfilm. I have been able to identify both of “Fred’s” parents and all four of his grandparents. I also learned that he had one younger brother (who died at the age of 8 years) and two older sisters. I have not yet started to look for descendants of Fred’s sisters.

That leaves me with just one mystery to solve about Fred Bull. I know that he died in May 1896 after being hit by a train. That fact is recorded on his death record, but that record was not filed until December 1896. Why was there such a delay in filing of his death record? I would also like to learn more about this “train accident.” Surely there would have been a mention of this death in local newspapers, but so far I have not found any mention of his death other than his death record and some evidence of legal action against the railroad company.

This site uses Akismet to reduce spam. Learn how your comment data is processed.